How Is Baijiu Made?

One of the most interesting things about Baijiu is the amazing differences in how it is made, depending on the aroma primarily. These distinctions form a big part of which aroma it is and each one has perhaps even more differences than say the varying categories of malt whisky. With Baijiu, flavours are strong and these are distinguished through the process of making it. In this article, we explore the key differences and a little about just how old some of them are.

Each ‘aroma’ of Baijiu has a distinction. The 4 main ones are sauce aroma, strong aroma, light aroma and rice aroma. Don’t let those names fool you! For example, light is not light on alcohol beverage, typically coming in at well over 50% alcohol volume (around 56 – 60 % typically). However, it is surprisingly one of the better ways to start enjoying Baijiu.

(although it depends what aroma is being made) are:

These ingredients are not necessarily present in each aroma but amongst the 4 main ones, they are used differently. The process of making Baijiu is broken down into the following methods with an excellent diagram from Lovebaijiu.com: 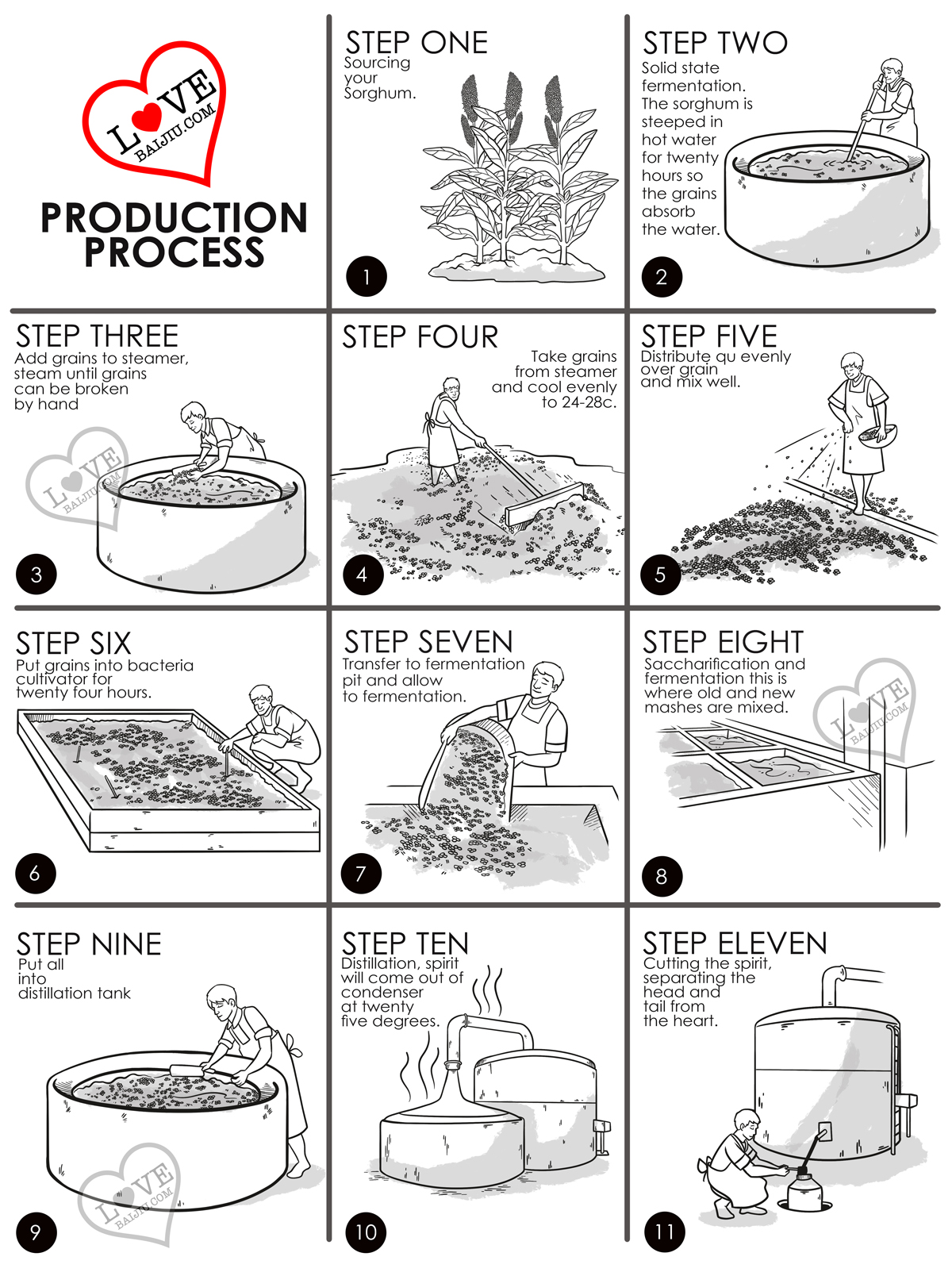 Firstly, sorghum (cereal crop) is used with possibly wheat and peas or other vegetables. Once washed, they are steamed or sometimes mashed. The grain is then unloaded and spread out to cool. Sometimes these ingredients are made very traditionally, by having someone trample them underfoot! Not that much different to the ancient process of making wine really. After this happens, the next process takes place which is to add the Qu, pronounced as choo. Qu is mixed grains with herbs and spring water / local water (usually). The Qu is mixed and shaped into balls or bricks which are stored in a warm environment, for about a month. Then the Qu is filled with yeast, fungi and various microorganisms. This is very important to impart the overall taste of Baijiu. (See: What is Qu)

Once the Qu is added to the mixture, often by sprinkling on top, the resulting mix is then raked and shoveled into a fermentation vessel. Qu also allows the new mixture to ferment and for saccharification to take place at the same time – in essence to allow the mixture to sweeten somewhat by converting the starch to sugar and the sugar to alcohol at the same time. In many ways, this is one of the unique processes of making Baijiu, making it arguably more potent and flavourful than its Western equivalents. At this point, it really depends on what aroma you want to make which leads to how the process moves forward.

Typically, the mixture is transferred to stone pits and fermented as much as 8 times in the course of a year, a month at a time. For example, the mixture is removed from the pit a layer at a time, mixed with more sorghum and fresh Qu then returned to the stone pit. This constant returning to the pit with the addition of extra sorghum each time is what gives sauce its distinctive taste and perhaps gives evidence as to why sauce aroma brands (many of them) are the most expensive Baijiu you can buy.

This aroma is fermented in mud pits for weeks or months to ferment. The alcohol actually seeps into the walls of the pit which apparently enhances the overall flavour; for example, Wuliangye brand has some pits which have been operational for 600 years! Spent grains are often mixed with fresh grains so there is a constant continuity between batches. Once the process is completed, the mash is taken out and distilled a layer at a time. It is then entered into the still in a solid state, the alcohol being steamed.

This aroma is made in stone pots, sometimes underground. The typical process is to have short production cycles, making it cheaper to produce. Initially the jars or pots are buried underground for 28 days; as the pots are dug out of the ground, rice bran is then added to the mix along with more Qu. At this point, the mixture is 70% alcohol volume! The mixture is then left to further mature and the alcohol lowers to 60% or below. Still quite potent but slightly more drinkable.

Rice aroma baijiu uses rice instead of sorghum as its main ingredient. It is actually steamed and cooled 3 times before use. Then rice based Qu is added. Rice Qu is similar to all Qu but sometimes has clay powder added for volume. The mixed ingredients are all then transferred to an earthenware jar with a hole made for aeration. It is left for 1 day before being transferred to a bigger jar with water added to activate the yeasts. After sitting for about a week it is taken out again. It is actually triple distilled with a mixture that when shaken may produce bubbles.

So that’s how you make Baijiu! Overall, when Baijiu is produced, some of the alcohol evaporates, what is known as the angel’s share. The resulting brew is what then leads to these wonderful aromas, with distinct characteristics, flavours and strengths.